What are the benefits of a moving walkway

What are the benefits of a moving walkway

During travel, people may take a walk instead of riding metal plates or conveyor belts. This type of transportation may be used to make longer connections between lines in underground stations. The movement of people is smooth, stable, and enjoyable. People may also choose to use it as a means of transportation because they are in a hurry to get to their destination. However, a moving walkway is not for everyone. There are many different benefits to using a moving walkway.
Initially, a moving walkway was a concept first introduced at the World's Columbian Exposition in Chicago in 1893. The walkway featured comfortable seating for both standing and seated passengers. It was later demonstrated during the Exposition Universelle in Paris in 1900. Today, moving sidewalks have become a common feature in airports and train stations. It is also used to connect two terminals. The moving walkway can be a great help for passengers who need to transfer from one station to another.
The concept behind a moving walkway is similar to a roller coaster. It uses three belts that move at varying speeds, and each one has a hand hold that moves with the walkway. It moves at a two-kilometre-per-minute pace when riders step onto it and speeds up to seven kilometers per hour at the end. There is no hand hold for the infirm, however. It also requires a lot of concentration and dexterity.
In addition to helping passengers get where they need to go, a moving walkway is also useful for crowd control. These systems are generally installed in passageways between concourses and are three to four feet wide. Because of this, they help the movement of passengers, but they don't speed up the travel time. The average speed of passengers using moving walkways is about 3 mph - less than half of the average walking speed at an airport. 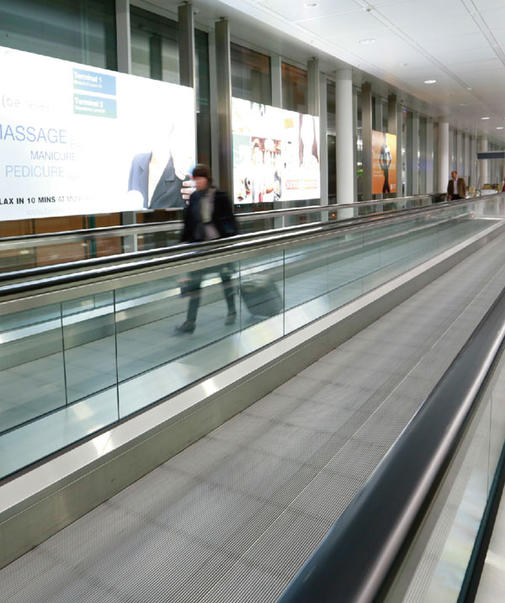 As easy as in smooth ground, the everlasting popular design & qualityTENAU moving walk elevates the shopping to a newly concise and comfortable realm. It not only satisfies the conveying problem of large passenger flow but also meets the requirements of long-distance walk, carrying luggage cart, baby's cart, shopping cart, the vehicle for the handicapped, etc. It is greatly convenient for people’s outing and shopping.